We publish the posts on our website, and you can subscribe to a newsletter; You don’t necessarily have to be a PHP Foundation backer to follow PHP Core Roundup.

September was a slow month, given that PHP 8.2 reached its feature-freeze, and most of the work is now focused on getting PHP 8.2 ready for its general availability, scheduled for November 24th.

Nikita Popov recently tagged three new releases of the nikic/PHP-Parser library with support for PHP 8.2 features and syntax. PHP-Parser is used as the underlying PHP parser for several PHP static analyzers, and you can expect many PHP tools to support new PHP 8.2 syntax in the coming weeks.

Although PHP 8.2 is still being ironed out, there are some discussions and even an RFC currently being voted for proposed changes in PHP 8.3 (scheduled for the end of 2023!).

Deprecations for PHP 8.3 RFC is currently in draft, which stands to track ideas on deprecating certain features. So far those are related to the mb_strimwidth function, NumberFormatter class, and a few functions related to Random Number Generators (RNG).

Furthermore, there is an RFC currently under vote to add a new function named json_validate(), that validates a given JSON string without the memory overhead of otherwise decoding the JSON string into memory.

Hundreds of awesome PHP contributors put their efforts into improvements to the PHP code base, documentation, and the php.net website. Here is a summary of some of the changes made by the people behind PHP. Things marked with 💜 are done by the PHP Foundation team.

Following are the RFCs and major pull-requests discussed, voted, and implemented since our last update.

Now that PHP 8.2 is being prepared for GA releases, the documentation available on php.net, requires updating. An initial version of the PHP 8.2 migration guide has been published.

George P. Banyard 💜 is tracking the progress for PHP 8.2 related changes in php/doc-en#1803, and you can help too!

You can also help with other existing issues, a good starting point are issues marked as “good first issue” that George went and triaged in preparation for Hacktoberfest. 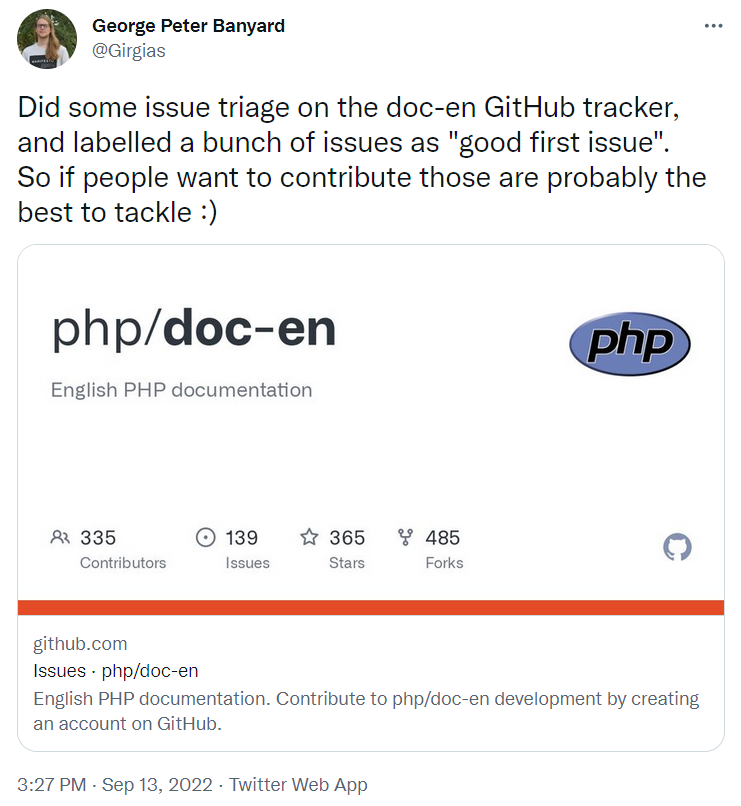 Derick has gone through all the datetime notes, and integrated them where needed, deleted where not.

Following are some changes that did not go through an RFC process because they are either planned, bug fixes, or progressive enhancements. There are automated unit and integration tests for each of these changes, the PHP core developers review all pull requests.

At PHP Foundation, we support, promote, and advance the PHP language. We financially support six part-time PHP core developers to contribute to the PHP project. You can help support PHP Foundation at OpenCollective.

A big thanks to all our sponsors — PHP Foundation is all of us!

A special mention goes to mailcoach.app for providing us with a platform for the newsletter.

PHP Roundup is prepared by Ayesh Karunaratne from PHP.Watch, a source for PHP News, Articles, Upcoming Changes, and more.

Edit this page on GitHub